Pastor Rodney Minniecon of  told the story to Kris Schlyder of the Australian Indigenous Prayer Network.

the mayor/chairman of the Torres Strait. Pastor Rodney Minniecon is in white shirt at extreme right of photo.

Many of the men are pastors. 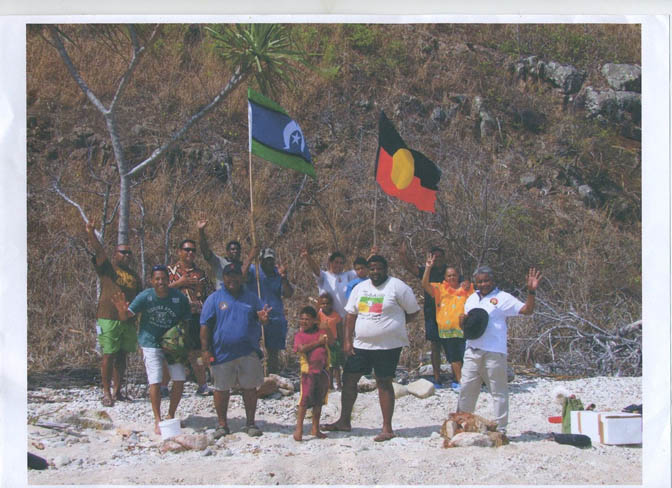 I was at a football match in Manly and there were real tensions developing over how the rules were being ignored. There were many indigenous and non-indigenous players and spectators. As the game ended, I had to find a Maratja – middle aged Christian Aboriginal leader. I had four things written on my hand from the wrist to the fingers – two were names of younger Aboriginal women who had some tension between them, and I had to talk with this man about it. We talked very briefly and looked at a mountain or steep hill next to Manly that had to be climbed, but knew we had to go to the football field first.

When we arrived a circle of people formed with us, holding hands and making a covenant to deal with the desecration of that place that was symbollised in the tensions over the rules in the football match. We were set a date for completion of a task: We were all to work over the next year to restore respect for what that place stood for.

Before western development, there was a stream running through there. It was a special place where the Aboriginal people came and camped near the stream – camped around the area of The Corso. It was a deeply spiritual place – but not a religious or ceremonial site – a place where couples enjoyed being in the water together – naked and unashamed – almost like in a baptism - and they came together sexually to inhabit the earth – in the beauty of holiness before their Creator and His purposes for them. It was a place where men were manly in the truest sense of the word, with deep respect and true love for their wife and their Creator.

And as we came together to share and celebrate a year later, I began to hear and see the worship from the land being released.

O worship the Lord in the beauty of holiness!

Bow down before Him – His glory proclaim;

With gold of obedience and incense of lowliness,

Kneel and adore Him, the Lord is His name.

Monte Ohia graduated into the eternal presence of his Creator and Lord suddenly on Thursday 12 June 2008.

Monte was a Maori Christian leader, who founded the World Christian Gathering on Indigenous People in 1996, and has been held every second year in a different nation since. The following tribute was written by Ps Ray Minniecon, Australian Aboriginal Christian leader, who was one of the WCGIP Vision Keepers with Monte from the beginning.

The following was written by Sam Watson in May, 2006, and sheds insights on the current situation across the nation.

The Aboriginal community of inner Brisbane, have set up a Men¹s Group that will dedicate itself to working with our and our youth. We will also make it a high priority to support our women, our Elders and consolidate our community generally. We have to remember that our men can play a very large part in the struggle towards our liberation as a people: we are the solution not the problem that the white system is trying to paint us as.

We have been meeting regularly as men and talking up our Men¹s Business  and we have been very concerned about the political witch hunt that has been orchestrated by politicians  both black and white, to attack Aboriginal men and marginilise us even further.

There is a jigsaw coming together today from the visions and dreams that a number of people have had during the last twenty-five years. Some of these people know that what they have seen and felt is really important, but they are now realising that those things are also a part of an awesome picture that God is putting together. We want to explain that picture to you.

The picture is one of repairing and affirming godly foundations for the nation and replacing ungodly ones, so that Australia can move forward from this point in time, to be: